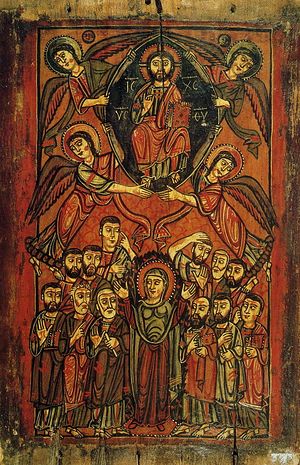 The Ascension of the Lord. VIII-IX century. Monastery of Saint Catherine’s Monastery of the God-Trodden Mount Sinai. The event of the Ascension of the Lord is described in detail only by Luke the Evangelist. Matthew the Apostle and John the Evangelist do not mention it at all, and Mark the Evangelist describes it in six words. Luke tells it in detail, for only to him it was reasoned through, having had perfect understanding of all things from the very first, to write in order the certainty of those things wherein hast been instructed, to his disciple, most excellent Theophilus. What is more, we find him telling of the Ascension of the Lord not only at the end of his Gospel, but also at the beginning of the Book of Acts of the Holy Apostles, thus undeniably underlining the unbroken link between the preaching of Christ and His disciples’ later apostolic labors. The seed of Evangelic Truth, sifted into the layer of the history of the New Testament, breaks the shell like a young seedling into the history of the Church of the New Testament.

In the evangelical narrative on the Ascension we read about how the disciples, having worshipped the ascending Christ, returned to Jerusalem with great joy. What are they joyful about? Their joy may seem strange. Their Teacher had left them only one month after His Resurrection, having resurrected their hopes that at this time He will restore the kingdom of Israel. A little over a month ago they had stopped hiding in their houses, for fear of the Jews. Christ has risen and their constant communication with the resurrected Teacher filled them with bravery and confidence in the safety of being next to Him. Christ’s inspired talks about the Kingdom of God—something that they could not comprehend before—would not allow them to think about what would come next, once the Teacher leaves. Did they even know that He would leave? Undoubtedly, they did. This is where the answer to the question is hiding as to why they rejoiced at His Ascension. Luke the Evangelist did not by accident combine the story about Christ’s Ascension with Christ’s farewell talk with the apostles, when He opened their understanding, that they might understand the scriptures. Together with the stories about something they could not accommodate before, the Lord prepared them for His departure, repeating: It is expedient for you that I go away: for if I go not away, the Comforter will not come unto you; but if I depart, I will send him unto you (John 16:7). By the promise of the Holy Spirit, the Lord brings joy for the disciples instead of sorrow; He breathes into them joy over the upcoming separation. And there really is no separation as such, because I am with you alway, even unto the end of the world. That’s what we read in the Gospel of Matthew, who was silent about the Ascension.

And could Christ have not departed at all? Could He have not departed, but instead have drawn into His “nets” an enormous “catch”, using all the abilities of His resurrected body, jubilantly walking together with the apostles across the whole world? Perhaps He could have. But that would have been a return to the temptations in the dessert and an attempt to Christianize the whole world by means of “bread and circuses”, an attempt to plant the Kingdom of Heaven on Earth. All of this the God-Man rejected during His earthly, much-sorrowing life, for, My Kingdom is not of this world. And corruption and death is not the place for the Resurrected, Immortal and Unchangeable.

Who is Christ—an authority Figure, or the Truth?

The Lord indicated that His departure was tied to the necessity of the coming of the Comforter, the Spirit of Truth. Why could the Spirit of Truth not come in the fleshly and visible presence of Christ? One of our Slavophiles1 has an interesting thought on this account. Reasoning about the Ascension of the Lord, he asks himself the question: Who is Christ—an authority Figure, or the Truth? Christ is the Truth, as He said Himself. But as long as He is with the disciples, he would have remained an authority Figure. And not because that is what Christ wanted, but because of the common human weakness to “weave a halo” over the Man who resurrected the dead, and Who fed thousands with a few loaves of bread. The authority Figure of Christ grew even greater in stature in the eyes of His disciples after His Resurrection. It posed the danger that they and the future disciples might follow Christ not because they accepted the truth of His teaching, but because of what the authority Figure of Christ did and taught. Thus, that they might receive the Truth—the Holy Spirit—Christ has to hide His presence, change His image of unity with the disciples. And from that day forward it is the Holy Spirit, the Spirit of Truth, sent by Him from the Father, that unites us with Christ.

The Church Fathers, discussing the Ascension of the Lord, see in this event the care of God’s Providence for humanity. Saint Dimitry of Rostov presents a vivid illustration of how the Lord’s distancing Himself brings His help closer to us. “Just as any king, collecting large numbers of his warriors into an army and wanting to see all his regiments, ascends onto a high place, onto a mountain or some building, in order to see and arrange everything from such a height, so does our Lord, the King of kings, gather the Church Militant on Earth, which has as many regiments as there are ranks, and ascends into the high heavens in order to see the feats of each one from that height. He weaves crowns for those who devote themselves well to their daily ascetic struggles; He stretches out His hand to help the weary, He raises up the fallen and makes them stronger in their struggle against the adversary, He creates obstacles against those who pursue us. The first martyr, Saint Stephen, remained faithful to the Lord through martyrdom when he was stoned by the Hebrews, and our Lord from the height of His glory opened the sky and looked at him, so that the martyr called out to Him: I see the heavens opened, and the Son of man standing on the right hand of God.2

The Lord ascends to heaven to open and to provide the way there for any Christian, for before the Ascension of Christ into heaven no man had a pathway to heaven: “And no man hath ascended up to heaven, says the apostle, but he that came down from heaven; He that descended is the same also that ascended up far above all heavens (Jn. 3:13; Eph. 4:10). Before, no one could ascend into heaven, even if he were righteous, and a saint… When our Lord, clothed in man’s nature, ascended into heaven, He forthwith revealed the way to heaven for all humankind. The souls of the holy forefathers and prophets, saints, martyrs and confessors, led out of hell, had followed Christ along that way; at the present time the worthy and the righteous people, who follow in the footsteps of Christ, ascend to heaven by Christ; now the way to heaven is known to all—the way that none had even heard about before; only, O people! do not be lazy in ascending it”.3

The Lord also ascends, as He Himself said, to prepare a place for the true Christian, that he might live and co-reign with Christ. In my Father’s house are many mansions: if it were not so, I would have told you. I go to prepare a place for you. And if I go and prepare a place for you, I will come again, and receive you unto myself; that where I am, there ye may be also. (Jn. 14:2-3). This reason is both good and full of joy. The Lord ascended from us to heaven to prepare a place: For people who love God, a place amongst the Seraphim; for those who are wise in God, amongst the cherubim; for the God-bearing, amongst the God-bearing thrones; for good masters, amongst dominions; for brave warriors, who devoted themselves to their homeland, amongst the powers; for various authorities, amongst authorities; various principals, who govern their precincts according to God’s law, will have their place amongst the angelic principalities; those who console their friends and the poor and help them in disaster and misfortune will have their place amongst the archangels; and finally, those who live in the flesh on earth like angels will have their place in the heavens together with angels”.4

And I, if I be lifted up from the earth, will draw all men unto me (Jn. 12:32): The Lord ascends, but continues to do the work of planting His Church on Earth. He sends the apostles into the world, everywhere accompanying and assisting them—for other sheep He has, which are not of this fold: them also He must bring (cf. Jn. 10:16).

Finally, the Lord ascends from us to heaven to make intercession for us before God the Father. “Here is what the Evangelist says: If any man sin, we have an advocate with the Father, Jesus Christ the righteous and he is the propitiation for our sins (1 Jn. 2:1-2). Paul the Apostle says in his Epistle to the Hebrews: For Christ is not entered into the holy places made with hands, but into heaven itself, now to appear in the presence of God for us (Heb. 9:24), and in the Epistle to the Romans: It is Christ that died, yea rather, that is risen again, who is even at the right hand of God, who also maketh intercession for us (Rom. 8:34).5

The foundation for receiving these gifts is the participation of human nature in Divine life, which was honored by the Wisdom of God. God in the Person of the God-man has connected with humanity and raised it up to the right hand of the God Father, so that now, according to St. John Chrysostom, we look and see with terror and surprise that in the depths of the mystery of the Holy Trinity there is a man: the man Jesus Christ. Human nature, the bearers of which each of us have the happiness to be, rests in the depths of God. For God so loved the world.

And while they looked steadfastly toward heaven as he went up, behold, two men stood by them in white apparel; Which also said, Ye men of Galilee, why stand ye gazing up into heaven? this same Jesus, which is taken up from you into heaven, shall so come in like manner as ye have seen him go into heaven (Acts 1:10-11). The Ascension of the Lord does not signify the end of the history of the God-man on Earth. The messengers of Divine Truth herald the end of the history of the terrestrial, together with which will come an end to the Teacher’s necessary separation from the disciples, of the Father from his children. The promise to be with all generations of disciples, always and unto the end of time, is an assurance of the unceasing, invisible presence of Christ with them during the time of separation. But every separation comes an end. Christ will certainly return to His disciples, granting them new hearts and bodies, and will transform the whole world. And His Kingdom will have no end. Even so, come, Lord Jesus! (Revelation 22:20).

1 The Slavophiles were part of a trend in Russian philosophy that developed as a contradiction to the “Westernizers”. This philosophy was a return to Russia’s roots in Orthodox Christianity.

2 St. Dimitry Rostovsky. Teaching on the Ascension of the Lord our Saviour Jesus Christ.