Whitworth University is honored to host Archbishop Benjamin of the Orthodox Church in America. He will hold a discussion on Eastern Orthodox liturgy and liturgical books on Monday, Oct. 14, from 7-8:30 p.m. in Weyerhaeuser Hall, Room 111. The event is free and open to the public. 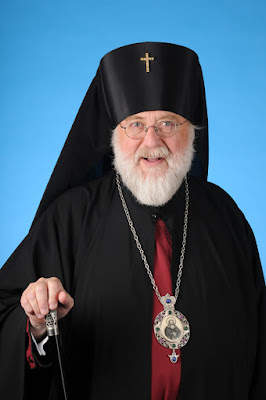 Archbishop Benjamin’s visit coincides with the “People of the Book” exhibit in the Whitworth library. It features rare liturgical books and historic items, including the prayer rope of Pyotr Stolypin, the third prime minister of Russia, who was assassinated in 1911. This exhibit will be featured in the library until the end of January 2020.

“Archbishop Benjamin’s ministry provides our students with a wonderful example of ministry and service,” says the Rev. Timothy Wilkinson, dean of Whitworth’s School of Business. “With his informal and personable style, he has used his musical and intellectual gifts to create and develop churches throughout the western U.S. He reminds us that that human beings should not be reduced to thinking of themselves as mere producers and consumers, but that we are meant to be liturgical beings, offering glory to God.”

Archbishop Benjamin is headquartered in San Francisco and overseas the western U.S., including a new church in Spokane, St. Luke Orthodox Church, which he will visit on Sunday, Oct. 13.

Born in Pasadena, Calif., he was received into the Orthodox Church in 1972 after attending services at Holy Virgin Mary Cathedral in Los Angeles. “The liturgy was new to me and was served in another language,” Archbishop Benjamin says. “However, in spite of that, I understood two things: worship was not about me, but about God, and that God was present there.”

In 1978, Archbishop Benjamin was awarded a master of divinity degree and Certificate in Liturgical Music from Saint Vladimir’s Seminary and then served at parishes in Detroit and Los Angeles and as chairman of the Orthodox Church in America’s Department of Liturgical Music. Eventually tonsured as a monastic, he served the church as an archdeacon and a priest before becoming a bishop in 2007.

Archbishop Benjamin’s lecture is the last of four talks that will take place during the fall semester focusing on the liturgical traditions of the Eastern Orthodox, Roman Catholic and Protestant traditions.

Located in Spokane, Wash., Whitworth is a private liberal arts university affiliated with the Presbyterian church. The university, which has an enrollment of more than 3,000 students, offers more than 100 undergraduate and graduate degree programs.